InMobi: First ever Unicorn startup of India in 2011

When we debate the leading startup of India, InMobi would unquestionably stand in the Prime 5.

Established by Naveen Tewari (currently serving as CEO), Mohit Saxena, Amit Gupta, and Abhay Singhal in 2007, it was formerly known as mKhoj.

InMobi, a leading startup of India, is an Indian multinational technology company specializing in mobile marketing and advertising. With its headquarters in Bangalore (India), it became the first-ever Unicorn startup of India in 2011.

The 1500+ employees strong company has 22 offices in 12 countries across 5 continents. Backed and financed by SoftBank, Kleiner Perkins Caufield & Byers, Ram Shriram’s Sherpalo Ventures, and UC-RNT Fund, InMobi provides mobile advertising solutions and competes with giants like Facebook and Google in the field.

As of current status of the company, it is used by world’s top brands, agencies, and developers to improve their business value by delivering compelling value propositions to their target customers. It offers a number of solutions to engage, retain, and encourage their global consumers in a friendly way using mobile advertising.

InMobi was known as mKhoj when it started in 2007. It used to be an SMS based search and monetization business.

Talking of SMS, how can you miss Signal Private Messenger!!!

The name mKhoj is a combination of “Mobile” and Hindi word “Khoj” (which means ‘to search’).

Initially, the company was focused on growing in Asia and Africa; but later entered America. With offices in 12 countries around the globe (India, the United States and China to name a few), InMobi is a global success.

InMobi, a startup of India, has managed to raise a total of US$215.6 million in three rounds of fundings.

With the steady upswing in funding and finances, it’s growth has been enormous. Following graph illustrates the same: 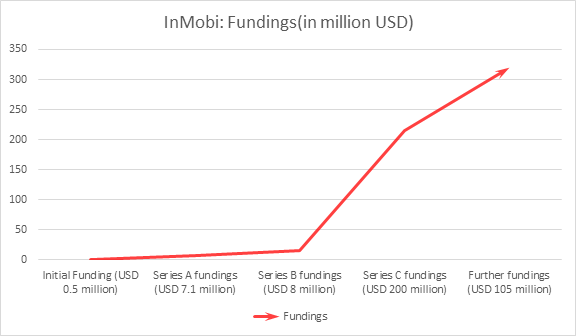 Glance, the world’s leading lock-screen platform, delivers easily accessible content that may be of interest to you such as news, images, text snippets, gifs, infographics, stories, gaming experience, videos, wallpapers, audio-visual programs, or such other information (“Content”).

In December 2020, Glance raised $145 million from technology giant Google and Silicon Valley billionaire Peter Thiel’s Mithril Capital, an existing investor in the company. InMobi’s Glance earned unicorn status after the findings. For a startup of India, this was indeed a huge success.

Being one of the leading startup of India, it has lots to carry on its shoulder for its future endeavor.

Naveen Tewari said, “InMobi is valued in between $2.5 to $3 billion. With its presence across 200 countries, the company is sitting on a verge of huge opportunity.”

He further added, “The overall estimated advertisement market size being of $650 billion in 2020 is expected to be $200-$250 billion for mobile advertising.”

Tewari openly admits his failure with his initial idea of mKhoj. He said, “During the initial days, we were very much confident about our idea. People want information about various deals in their city, and will happily pay for an SMS. We were lucky to get $500K in initial round of funding from Mumbai Angels. We thought we had cracked it. But we crashed.”

InMobi—a company which had a vision, mission, commitment, and passion—is a story of an Indian company that dreamed to go international and materialized it with its hard work and dedication.

Enjoyed reading Startup of India article? Interested in more case studies? You can find them here.

The Ins and Out of Marketing.

So, NYKAA was started back in 2012 by Falguni Nayar, an ex-directing manager of Kotak Mahindra. After serving for 20 years as a venture investor

Do you want to know how to earn money on YouTube easily? Then you’re at the right place. Today, I’m going to tell you about

Can we help you with Marketing?

drop us a line and keep in touch

Wordpress Hosting and CDN by Cloudways  2021 All Rights Reserved – Epigroww